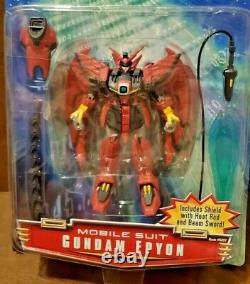 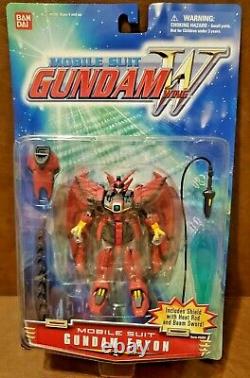 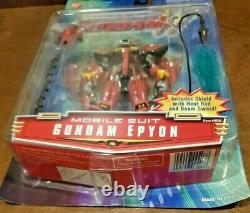 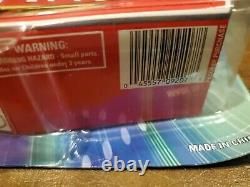 Get this hard to find rare Gundam 4.5 Action Figure , factory sealed stored in a box without any sunlight or extreme temperature, comes from a smoke free and pet free home in the United States. The product is in Excellent condition, NO yellowing on package, but may have some shelf wear as this item is from Year 2000.

This is the perfect gift for any Gundam fan of the Gundam Wing animation classic show. This is the original Gundam Epyon with Shield with Heat Rod and Beam Sword included edition.

If interested, this is a listing of possible armaments in the Gundam Wing TV series. The primary weapon of the Epyon, it is connected directly to the suit's powerplant via a cord as opposed to running on its own internal power source.

This allows the length and the intensity of the beam blade to be adjusted according to the situation, and at maximum level, it can inflict damage severe enough to destroy objects as large as the Space Fortress Bulge. Mounted on the forearms, they are used as landing gear in MA Mode. In combat, they can be used to tear through enemy armor. A small shield mounted on the left arm, its surface has been treated with anti-beam coating to provide protection against beam attacks. It mounts a heat rod at the bottom.

A segmented whip-like chain housed in Epyon's shield. It can be used to trip or entangle opponents, and even cut through mobile suits when heated. A single swipe with this weapon can destroy up to three OZ-06MS Leo. Added later, the pair of head-mounted shell firing weapons have a high-rate of fire, but little power and are generally ineffective against mobile suits. However, they can damage lightly armored areas such as the sensors, and are ideal for shooting down small, lightly armored targets such as missiles, small vehicles, etc. An additional equipment used by Gundam Epyon after Zechs Merquise joins the White Fang in Mobile Suit Gundam Wing Endless Waltz: Glory of the Losers manga. These small wing-like devices use similar technology to OZ-13MSX2 Mercurius's planet defensors and can be either attached to Epyon's forearms in "Defense Mode", generating powerful defensive force field capable of blocking XXXG-00W0 Wing Gundam Zero's twin buster rifle, or attached to the beam sword in "Zweihander Mode" to generate a massive beam blade. When using this equipment, the Epyon Shield is mounted on the rear skirt armor.